Do you live in a NSW heart-attack hot spot?

The figures show that the Riverina region – which includes Wagga Wagga, Griffith, Gundagai and Deniliquin – is the state’s heart-attack capital. People living in this region are admitted to hospital for heart attacks at a rate of 21.5 per 10,000 people. This is well above the state average (14.5).

Sydney’s Blacktown region is a close second, with a heart-attack hospitalisation rate of 21.1, followed by Sydney’s Outer South West (18.7), Richmond - Tweed (18.2) and Coffs Harbour -Grafton (18.1). The lowest rates are found in Sydney’s most affluent areas. 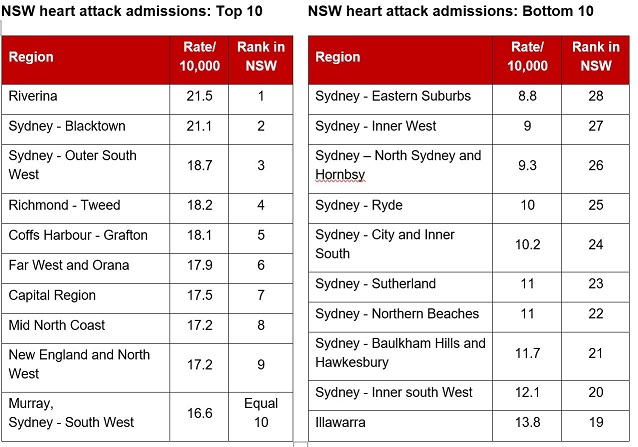 The statistics are part of the latest update to the Heart Foundation’s Australian Heart Maps. This is an online tool that allows users to look at data for heart disease deaths, hospitalisations and risk factors at a national, state, regional and LGA level.

According to the data, the New England and North West region, which includes Tamworth, Armidale, Inverell, Moree and Gunnedah, has the state’s highest rate of deaths from coronary heart disease (CHD). This region’s death rate is 85.8 out of every 100,000 people, well above the state average of 64.5. It is also nearly double the region with the lowest rate, North Sydney and Hornsby. Of the 10 NSW regions with the lowest CHD death rates, all are in metropolitan Sydney.

“These figures reveal an alarming inequality between the NSW residents who are most and least at risk of heart disease, as well as those who are most and least likely to be hospitalised or die from the condition, including from a heart attack,” said the Heart Foundation’s NSW/ACT Heart Health Manager, Anna Flynn.

“If you live in the state’s remote south, north or west, or in a disadvantaged part of Sydney, you have a much higher chance of heart disease, which remains the single leading cause of death in NSW,” Ms Flynn said.

“This is unacceptable, and the Heart Foundation will continue its work to reduce heart disease. We also urge governments at all levels to take action to curb the toll – especially in regional, rural and disadvantaged areas, where our Heart Maps show the burden of heart disease is at its highest.”

The Heart Foundation encourages all NSW residents to take action to protect their heart health. If you’re 45 and over, or from age 30 if you’re Aboriginal or Torres Strait Islander, talk to your GP about having a Heart Health Check.

Could you be at risk of heart disease? Get your estimated heart age now....

Information on how air pollution, heatwaves and bushfires can impact heart health, and what you can do to look after yourself. ...

Emma shares her story and opens up about her emotional struggles....

Eating healthy foods can help you recover and reduce your risk of more heart problems. ...

Physical activity and exercise can benefit your heart, body and mind....

Smoking is a major risk factor for heart disease. Get the facts on quitting and how it can help you recover. ...

The program works with local communities to help improve heart health in the Pilbara....

There are still more than 20,000 deaths caused by smoking every year....

The Postdoctoral Fellowship aims to identify the best and brightest (recent) PhD graduates, give them a boost to their research career and enhance their ability to attract and secure future funding....

Strategic Grants aim to generate innovative and collaborative research in the areas of identified knowledge gaps or those deemed to be priorities of the Heart Foundation. ...

Resources to help you create a more physically active workplace....

Due to end of financial year and the ongoing lockdowns in several states, we are currently experiencing some delays in processing and receipting of donations....

Blood tests can measure the levels of substances such as blood fat to show if, and how much of, your heart has been damaged....

Find out what a healthy body weight is and the steps you can take to achieve it. ...

A coronary artery calcium score can be used following a Heart Health Check to estimate your risk of heart attack....

Search and order from our range of printed patient resources online. ...